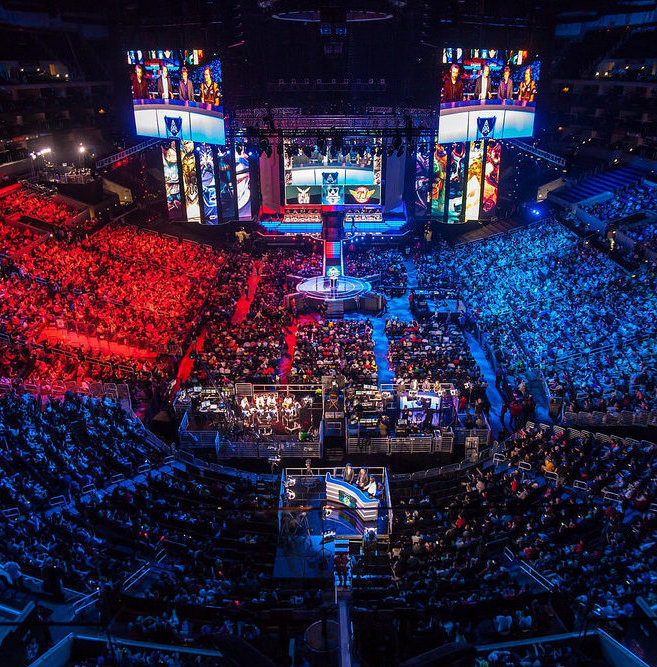 Talking about eSports tournaments nowadays has become something very natural, especially these past few years, when the tournaments that have prize pools that reach tens of millions of dollars and fill out stadiums that can hold as much as 40,000 people without taking into consideration how many people watch them from their homes, which by the way reaches millions in any given large tournament in the eSports world. The eSports contests have been proving to the entire world that they aren’t just small time tournaments where young kids get to have fun. The amount of money and the organization that it is put into organizing such tournaments is mind-blowing. The world championship of the most famous games usually start preparations many months ahead before they are held.
Last year was an incredible year for eSports when it comes to the size of the tournaments, participation wise and also the number of people watching them grew significantly. The major tournaments of League of Legends or Dota 2 managed to fill out gigantic stadiums. All the current indicators are pointing to an even better future for these tournaments, because 2017 is expected to have even larger crowds with prize pools that continue to break records.

The current eSports championships have numbers that to some are still hard to fully understand. They still have a hard time believing in the numbers shown at them and how much professional eSports players earn just from these tournaments each year. Let’s just put it this way, some of the highest earners in eSports earn more in a couple of years than many people earn their entire lives. The tournaments are held year round and each game has some sort of World Championship where teams from the entire world get to participate. The humble beginnings of the eSports tournaments are still very fresh to many people’s minds, just some 10 years ago the number of fans that went to see tournaments live we’re in hundreds, the huge boom happened these past couple of years.

The biggest eSports tournaments are usually the world championships of the most famous games like League of Legends or Dota 2. If we start talking about prize pools then Dota 2 holds the crown for the tournament with $20 million. The 2016 International is the tournament with the highest payday to date. We are expecting increases this year as well as The International continues to break its own record every year. The winners of the last International were Wings Gaming that won $9,139,002. Digital Chaos that was placed 2nd won $3,427,126. Not bad for what many people consider just a bunch guys playing games.
The largest eSports tournaments are showing no signs of stopping both in revenue and audience. It’s also very interesting to point out that the difference between eSports and traditional sports is in the fact that eSports have mostly remained the same for decades and new sports being invented and becoming actually famous are nowadays unheard of, while in the eSports industry it’s the opposite.
When Counter Strike came out it managed to conquer the world and it managed to stay at the peak for some years but then games like Dota 2 and League of Legends came out and took the eSports world to lengths that were thought to be impossible before. League of Legends came out in 2009 and this year the 7th annual world championship will be held and it is expected to be extremely big. The title of
The games that stay on top for some years need to continuously adapt and change each year or they will face what their predecessors faced some years ago. That is why most of the massive online games continuously introduce novelties in order to keep the players engaged and attached to the game, there’s always something new to learn, something new to do.
Another reason for the continual need of the game creators to update the game is the fact that the game graphics are becoming better and better each year. The level of detail that we have now compared to what we had 5 years ago is incredible. For the game makers of these gigantic games to be able to attract these large numbers of people each year when we take into consideration that every year numerous games come out and try to go for the number one spot of the most played game of the year is an incredible feat to achieve every year.

The evolution of the eSports tournaments has happened extremely fast when compared to the traditional sports. When it comes to the number of fans that watch these tournaments throughout the world, League of Legends remains the most watched eSport so far and it has been so for some years. When the first world championship of League of Legends was held in June 2011 where only a handful spectators were present for the finals of the championship. While there may have not been many spectators over 1.6 million people who watched the finals over their computers. However, with each year the progress was immense. The next world championship finals were held in front of 10,000 people in the University of Southern California’s Galen Center.
This trend continued each year, in the 5th annual world championship which was held across Europe and the finals were held in Berlin, Germany. A peak of 14 million concurrent viewers watched the finals and the unique viewer count for the finals was 36 million. If you think that the numbers can’t get any bigger than this you would be more than wrong. The last year’s World Championship managed to rake in even bigger numbers. This final holds records when it comes to viewership with 43 million unique viewers and a peak concurrent viewership of 14.7 million. The finals were an incredible success for the tournament organizers; they played in front of 20,000 fans at the Staples Center in Los Angeles.
The prediction based on the numbers that we have and the past experiences we can safely say that we can expect the world championship to break records this year as well. The title for the most popular eSports tournament will probably still be held by League of Legends World Championship for some years to come. With the current growth of the eSports market in the world and the increasing of the awareness each year League of Legends is benefitting the most. They have already surpassed the viewership of the NBA finals so it’s no surprise if they surpass other famous sports as well. The visual aspect of these organizations is at the highest level. The eSports tournament software used is of the highest quality and makes the experience for the viewer many times more enjoyable.

This year will be quite busy for many of the professionals in eSports. From the regional leagues and the smaller tournaments held every couple of months to the world championships held each year where all the top teams and the best players in the world gather to compete against one another. In this article we will be mentioning the biggest tournaments of some of the most famous games at the moment. The most famous tournaments in the world are mostly held in the South Eastern Asia, Europe and North America. If you Google eSports tournaments near me and you live in some of the biggest cities in one of these regions you may be in luck and have the chance to see some of your favorite players performing live.

This year will be quite eventful and we have plenty to be excited about. Starting from the world championships to internationals and then continuing to regular splits and many majors for us to enjoy watching this year.

As it has become a tradition already, League of Legends will find a way to somehow become even bigger every year and organize better the major tournaments that it holds. Each spring and summer, Riot organizes the regular splits in all the major regions starting from North America, Europe, Korea, China and continuing to many other smaller regions that try to qualify for the biggest tournament held each year, the World Championship. This tournament will have 24 teams this year a difference from the previous years where there were only 16 participants competing against each other for the title.
The tournament will be held in China starting from September 23rd to November 4th. This tournament will be probably more interesting since we will get to see teams from all over the world. League of Legends fans are already aware of the fact that dark horses tend to do surprise many people each year. The eSports tournaments 2017 for League of Legends don’t end with the World Championship and the regular splits.
The Mid-Season Invitational is a very interesting tournament that is held each year around the April/May period. This year Sao Paulo and Rio De Janeiro, Brazil will be hosting MSI. The tournament will start April 28th and end in May 21st. During the years we’ve seen some of the fiercest rivalries unravel and gave us some unforgettable moments. As for attendance we will be expecting another year where we might see tens-of-thousands of people packed in a stadium for both the Mid-Seasonal Invitational and the World Championship. According to every indicator it is expected that the prize pool will be even bigger this year for the World Championship.

This year like the last one will surely be another year of success for all the major games and the eSports industry in general. The anticipation is great from eSports fans all over the world. The major tournaments will surely bring us more unforgettable moments that we will cherish. The number of tournaments is increasing each the eSports industry and we hope that this trend continues for many years to come.