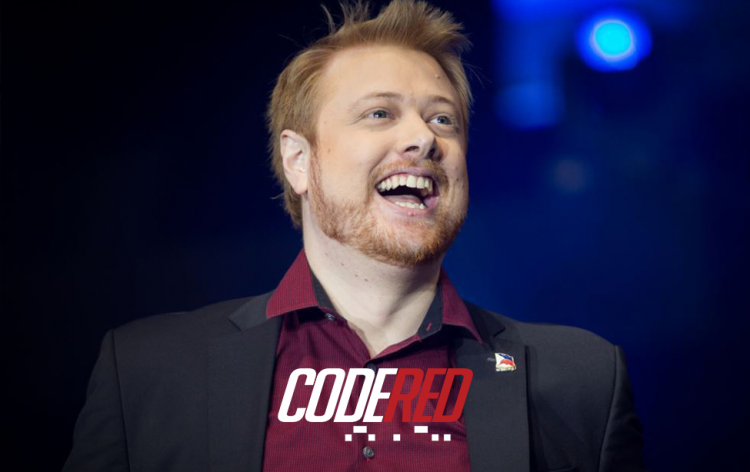 From the recent tweets published by the UK-based esports agency, Code Red Esports, it became clear that the company hired a new Head of Broadcast Talent – Toby “TobiWan” Dawson.

TobiWan, the Australian Dota 3 caster, has quite an impressive working experience. Notably, he was working for 9 years straight with The International – Dota 2’s championship event. Moreover, Toby Dawson has been working as a member of the broadcast talent team for over 58 events ever since 2011.

Tody Dawson is a talented commentator who has been highlighting the majority of iconic moments in esports. Even though Toby is mostly famous for play-by-play commenting Dota 2, he recently joined PLAYERUNKNOWN’S BATTLEGROUNDS. Toby’s excitement about what he does has led him to be nominated twice at the Esports Industry Awards as the Personality of the Year back in 2016, as well as the broadcaster of the Year in 2017. But most importantly, Toby Dawson got the love of his fans – now he has over 400,000 followers across his channels and this number keeps growing every month.

Toby “TobiWan” Dawson has made his appearance on many high ranked eSport betting sites because users and eSports players love him, and what is more, trust him. Therefore, sometimes even just seeing his name ensures people in the quality and reliability of the site.

“For any of you that may be worried you’ll no longer be seeing @TobiWanDOTA on your favorite Dota broadcasts – DON’T FRET! Toby will be continuing his casting career alongside his new staff role at Code Red.” 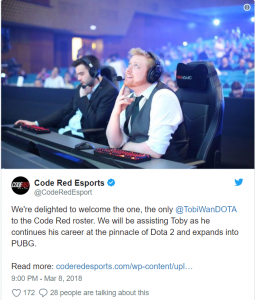 Toby Dawson, as a Head of Broadcast Talent will be responsible for a set of duties: sourcing and booking work, developing the talent hiring solution and expanding the agency’s roster of talent.

“We’re thrilled to have someone of Toby’s ability & stature join our team as we continue to improve the services we offer our broadcast talent and tournament organizers. His commentary history speaks for itself, he inherently understands the life of talent and is passionate about developing future stars.”

Overall, it seems like a very wise decision made by the esports agency as TobiWan has gained extensive expertise in on-camera talent and management of the on-camera talent. Therefore, he will definitely be able to understand what the customers of Code Red Esports are going through and what they might like to be changed.

Apart from that, Code Red Esports already has a number of influencers that are acting on the side of the agency. Also, new clients are expected to be added to their ranks in the nearest future. With the list of “already secured significant commercial partnerships”, Code Red Esports seems to be promising for all investors who are seeking companies to invest in within the esports industry.

“Code Red’s ethos has always been to offer first-class representation to the talent we represent and to help brands engage authentically with the esports and gaming audience. Our influencer marketing proposition perfectly marries these two goals, giving companies access to innovative ideas combined with some of the best gaming influencers.”